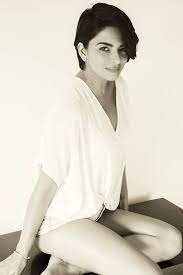 Himanshi Choudhary is a British actress, model, and anchor, born in Manchester, England. Himanshi Choudhary has so far worked in the Hindi entertainment sector, and web series in Hindi, Telugu, Tamil as well as English have included her artwork.

In the United Kingdom’s Manchester, Himanshi Choudhary was born. Ramesh Choudhary is her father, and Neelam Choudhary is her mother. The name of Himanshi’s sibling is Anuj Choudhary. In Delhi, Himanshi attended Springdales School for her education. Himanshi also holds an associate’s degree in performing arts from Dean College in Franklin, Massachusetts.

Himanshi started aspiring to begin an acting career in 2000 after returning to India and relocating to Mumbai. Although it took Choudhary a long, depressing year and numerous production house auditions, she eventually began landing quality jobs because of her connections and varied acting abilities. Himanshi has appeared in cameo roles in numerous films and more than 20 television shows. Himanshi’s debut appearance was in the Sahara TV original of Balaji’s “Kahin To Milenge ” series. Choudhary then continued her streak of success by appearing in numerous popular TV shows of the era, including “Kutumb” (Sony Entertainment Television), “Des Mein Nikla Hoga Chand” (Star Plus), “Lavanya” (Zee TV), “Kasshish” (Zee TV), “Bhabhi” (Star Plus), “Kareena Kareena” (Zee TV), “Jabb Love Hua” (Zee TV), Rakt Sambandh (Imagine) and most recently on the series Ishq Kills on Star Plus. These people range from humorous and traditional to evil and contemporary. Himanshi was also keeping busy showing off her incredible talents in a few guest appearances in movies around this time. Himanshi made an appearance in the hugely well-liked romantic comedy Ishq Vishk (2003), which introduced future stars Shahid Kapoor & Amrita Rao. However, Himanshi is well known for portraying the significant part of Sia in the film “Antardwand” (2008).

Many prominent members of the Bollywood film industry praised this film for its treatment of the subject of groom abduction, and Himanshi herself claimed that working on the film altered her life. Himanshi has also worked as an anchor for numerous reality programmes. Choudhary made an appearance on the episode of Devlok on EPIC TV and interrogated Devdutt about Indian deities.

Himanshi made an appearance on the episode of Devlok on EPIC TV and interrogated Devdutt about Indian deities. Himanshi is not only a talented and attractive actor, but she is also enthusiastic about politics & keeps up with current events by constantly posting on social media. Himanshi enjoys wearing beautiful shoes and is stylish as well. Choudhary enjoys dancing and taking pictures. Himanshi’s father served as an inspiration for her burgeoning interest in photography.